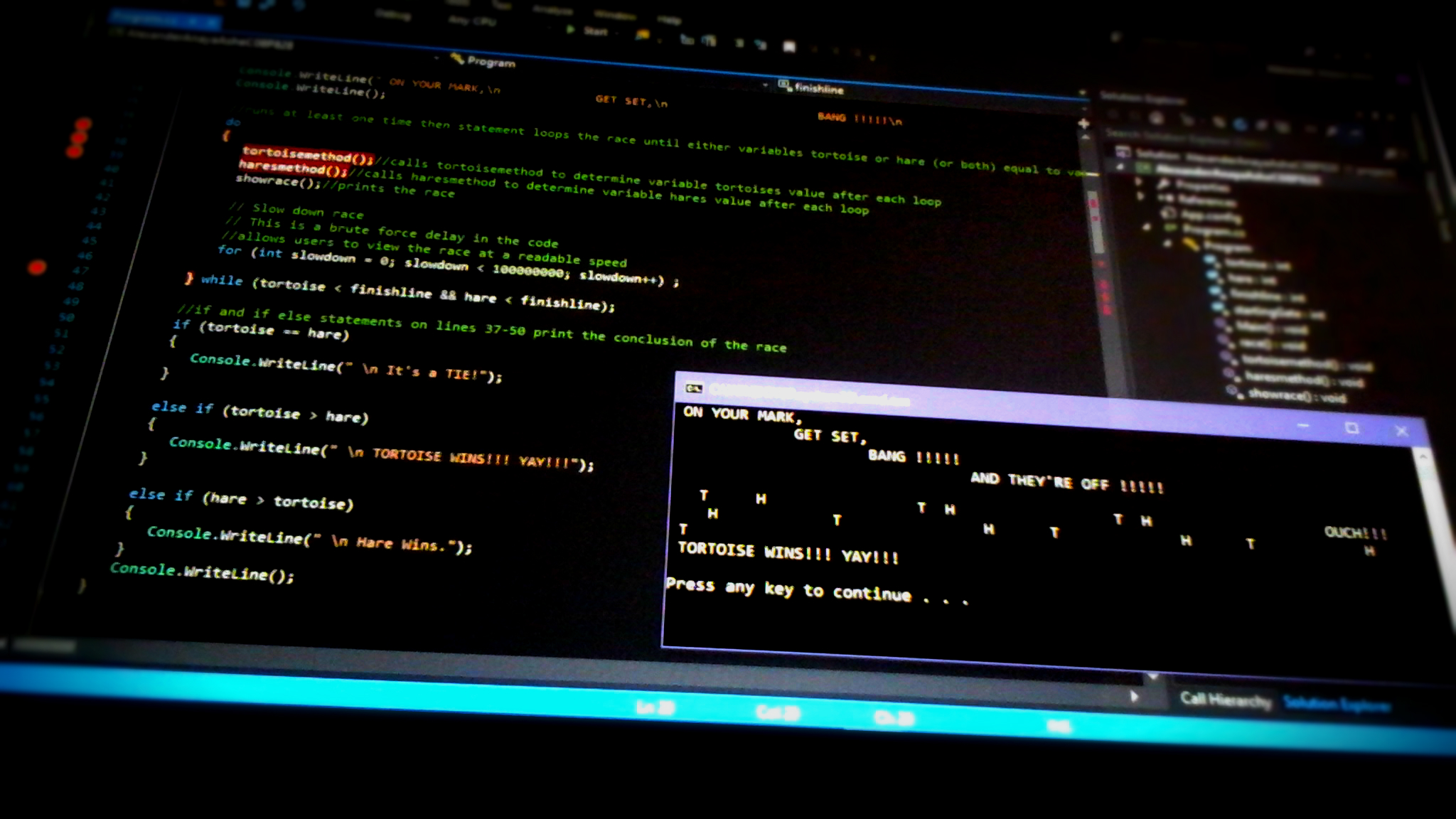 This lesson introduces C# data types, operators and variables. Its goal is to meet the following objectives:

“Variables” are simply storage locations for data. You can place data into them and retrieve their contents as part of a C# expression. The interpretation of the data in a variable is controlled through “Types”.

C# is a “Strongly Typed” language. Thus all operations on variables are performed with consideration of what the variable’s “Type” is. There are rules that define what operations are legal to maintain the integrity of the data you put in a variable.

The C# simple types consist of the Boolean type and three numeric types – Integrals, Floating Point, Decimal, and String. The term “Integrals”, which is defined in the C# Programming Language Specification, refers to the classification of types that include sbyte, byte, short, ushort, int, uint, long, ulong, and char. More details are available in the Integral Types section later in this lesson. The term “Floating Point” refers to the float and double types, which are discussed, along with the decimal type, in more detail in the Floating Point and Decimal Types section. The string type represents a string of characters and is discussed in The String Type section, later in this lesson. The next section introduces the boolean type.

Boolean types are declared using the keyword, bool. They have two values: true or false. In other languages, such as C and C++, boolean conditions can be satisfied where 0 means false and anything else means true. However, in C# the only values that satisfy a boolean condition is true and false, which are official keywords. Listing 2-1 shows one of the many ways that boolean types can be used in a program.

In Listing 2-1, the boolean values are written to the console as part of a sentence. The only legal values for the bool type are either true or false, as shown by the assignment of true to content and false to noContent. When run, this program produces the following output:

In C#, an integral is a category of types. For anyone confused because the word Integral sounds like a mathematical term, from the perspective of C# programming, these are defined as Integral types in the C# programming language specification. They are whole numbers, either signed or unsigned, and the char type. The char type is a Unicode character, as defined by the Unicode Standard. Table 2-1 shows the integral types, their size, and range.

Table 2-1. The Size and Range of C# Integral Types

Integral types are well suited for those operations involving whole number calculations. The char type is the exception, representing a single Unicode character. As you can see from the table above, you have a wide range of options to choose from, depending on your requirements.

A C# floating point type is either a float or double. They are used any time you need to represent a real number, as defined by IEEE 754. For more information on IEEE 754, visit the IEEE Web Site. Decimal types should be used when representing financial or money values. Table 2-2 shows the floating point and decimal types, their size, precision, and range.

Table 2-2. The Floating Point and Decimal Types with Size, precision, and Range

Floating point types are used when you need to perform operations requiring fractional representations. However, for financial calculations, the decimal type is the best choice because you can avoid rounding errors.

A string is a sequence of text characters. You typically create a string with a string literal, enclosed in quotes: “This is an example of a string.” You’ve seen strings being used in Lesson 1, where we used the Console.WriteLine method to send output to the console.

Some characters aren’t printable, but you still need to use them in strings. Therefore, C# has a special syntax where characters can be escaped to represent non-printable characters. For example, it is common to use newlines in the text, which is represented by the ‘\n’ char. The backslash, ‘\’, represents the escape. When preceded by the escape character, the ‘n’ is no longer interpreted as an alphabetical character but now represents a newline.

You may be wondering how you could represent a backslash character in your code. We have to escape that too by typing two backslashes, as in ‘\\’. Table 2-3 shows a list of common escape sequences.

Results are computed by building expressions. These expressions are built by combining variables and operators together into statements. The following table describes the allowable operators, their precedence, and associativity.

Table 2-4. Operators with their precedence and Associativity

When evaluating expressions, post-increment (x++) and post-decrement (x–) operators return their current value and then apply the operators. However, when using pre-increment (++x) and pre-decrement (–x) operators, the operator is applied to the variable prior to returning the final value.

While the (~) operator works by flipping bits, the logical negation operator (!) is a logical operator that works on bool values, changing true to false or false to true. In the case of the logNot variable in Listing 2-2, the value is initialized to false, and the next line applies the logical negation operator, (!), which returns true and reassigns the new value, true, to logNot. Essentially, it is toggling the value of the bool variable, logNot.

The setting of positive is a little tricky. At the time that it is set, the postIncrement variable is equal to -1. Applying the minus (-) operator to a negative number results in a positive number, meaning that positive will equal 1, instead of -1. The minus operator (-), which is not the same as the pre-decrement operator (–), doesn’t change the value of postInc – it applies a sign negation. The plus operator (+)doesn’t affect the value of a number, assigning negative with the same value as postIncrement, -1.

Notice the expression (sbyte)(~bitNot). Any operation performed on types sbyte, byte, short, or ushort return int values. To assign the result into the bitNot variable we had to use a cast, (Type), operator, where Type is the type you wish to convert to (in this case – sbyte). The cast operator is shown as the Unary operator, (T)x, in table 2-4. Cast operators must be performed explicitly when you go from a larger type to a smaller type because of the potential for lost data. Generally speaking, assigning a smaller type to a larger type is no problem since the larger type has room to hold the entire value. Also, be aware of the dangers of casting between signed and unsigned types. You want to be sure to preserve the integrity of your data. Many basic programming texts contain good descriptions of bit representations of variables and the dangers of explicit casting.

Here’s the output from the Listing 2-2:

And here’s the output:

Listing 2-3 shows several examples of binary operators. As you might expect, the results of addition (+), subtraction (-), multiplication (*), and division (/) produce the expected mathematical results.

There is also an example of the remainder(%) operator. It performs a division operation on two values and returns the remainder.

The last statement shows another form of the assignment with the operation (+=) operator. Any time you use the assignment with operation operator, it is the same as applying the binary operator to the left hand and right-hand sides of the operator and putting the results into the left-hand side. The example could have been written as result = result + x; and returned the same value.

Another data type is the Array, which can be thought of as a container that has a list of storage locations for a specified type. When declaring an Array, specify the type, name, dimensions, and size.

And here’s the output:

Listing 2-4 shows different implementations of Arrays. The first example is the myInts Array, which is a single-dimension array. It is initialized at declaration time with explicit values.

The third example is a two-dimensional array, myDoubles. Arrays can be multi-dimensional, with each dimension separated by a comma. It must also be instantiated with the new operator.

Finally, we have the single-dimensional array of string types, myStrings.

In each case, you can see those array elements are accessed by identifying the integer index for the item you wish to refer to. Array sizes can be an int type value. Their indexes begin at 0.

To Wrap Up C# Data Types: Operators and Variables

A variable is an identifier with a type that holds a value of that type. Simple types include the integrals, floating points, decimal, and bool. C# has several mathematical and logical operators that participate in forming expressions. C# also offers the single dimension, multi-dimension and jagged array types.

In this lesson, you learned how to write simple statements and code a program that works linearly from start to finish. However, this is not as useful as it can be because you need to be able to make decisions and execute different blocks of code depending on different conditions. I invite you to return for C# If Statement: Control Selection in Lesson 3, where you can learn how to branch your logic for more powerful decision making.

We hope that this lesson on C# Data Types was informative. Please email us with your feedback.