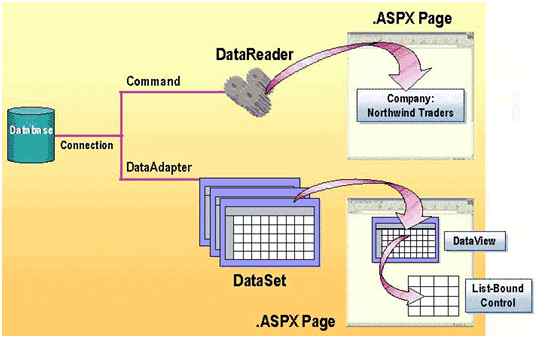 This lesson explains how to work with disconnected data, using the DataSet and SqlDataAdapter objects. Here are the objectives of this lesson:

In Lesson 3, we discussed a fully connected mode of operation for interacting with a data source by using the SqlCommand object. In Lesson 4, we learned how to read data quickly an let go of the connection with the SqlDataReader. This Lesson shows how to accomplish something in-between SqlConnection and SqlDataReader interaction by using the DataSet C# and SqlDataAdapter objects.

A DataSet is an in-memory data store that can hold numerous tables. DataSets only hold data and do not interact with a data source. It is the SqlDataAdapter that manages connections with the data source and gives us disconnected behavior. The SqlDataAdapter opens a connection only when required and closes it as soon as it has performed its task. For example, the SqlDataAdapter performs the following tasks when filling a DataSet with data:

and performs the following actions when updating the data source with DataSet changes:

In between the Fill and Update operations, data source connections are closed and you are free to read and write data with the DataSet as you need. These are the mechanics of working with disconnected data. Because the applications hold on to connections only when necessary, the application becomes more scalable.

A couple scenarios illustrate why you would want to work with disconnected data: people working without network connectivity and making Web sites more scalable. Consider salespeople who need customer data as they travel. At the beginning of the day, they’ll need to sync up with the main database to have the latest information available. During the day, they’ll make modifications to existing customer data, add new customers, and input new orders. This is okay because they have a given region or customer base where other people won’t be changing the same records. At the end of the day, the salesperson will connect to the network and update changes for overnight processing.

Another scenario is making a Web site more scalable. With a SqlDataReader, you have to go back to the database for records every time you show a page. This requires a new connection for each page load, which will hurt scalability as the number of users increases. One way to relieve this is to use a DataSet that is updated one time and stored in the cache. Every request for the page checks the cache and loads the data if it isn’t there or just pulls the data out of the cache and displays it. This avoids a trip to the database, making your application more efficient.

Exceptions to the scenario above include situations where you need to update data. You then have to make a decision, based on the nature of how the data will be used as to your strategy. Use disconnected data when your information is primarily read-only, but consider other alternatives (such as using a SqlCommand object for immediate update) when your requirements call for something more dynamic. Also, if the amount of data is so large that holding it in memory is impractical, you will need to use SqlDataReader for read-only data. Really, one could come up with all kinds of exceptions, but the true guiding force should be the requirements of your application which will influence what your design should be.

There isn’t anything special about instantiating a DataSet. You just create a new instance, just like any other object:

The DataSet constructor doesn’t require parameters. However, there is one overload that accepts a string for the name of the DataSet, which is used if you were to serialize the data to XML. Since that isn’t a requirement for this example, I left it out. Right now, the DataSet is empty and you need a SqlDataAdapter to load it.

The code above creates a new SqlDataAdapter, daCustomers. The SQL select statement specifies what data will be read into a DataSet. The connection object, conn, should have already been instantiated, but not opened. It is the SqlDataAdapter’s responsibility to open and close the connection during Fill and Update method calls.

As indicated earlier, the SqlDataAdapter contains all of the commands necessary to interact with the data source. The code showed how to specify the select statement, but didn’t show the insert, update, and delete statements. These are added to the SqlDataAdapter after it is instantiated.

As I mentioned earlier, the SqlCommandBuilder has limitations. It works when you do a simple select statement on a single table. However, when you need a join of two or mor tables or must do a stored procedure, it won’t work. I’ll describe a workaround for these scenarios in future lessons.

Once you have a DataSet and SqlDataAdapter instances, you need to fill the DataSet. Here’s how to do it, by using the Fill method of the SqlDataAdapter:

The Fill method, in the code above, takes two parameters: a DataSet and a table name. The DataSet must be instantiated before trying to fill it with data. The second parameter is the name of the table that will be created in the DataSet. You can name the table anything you want. Its purpose is so you can identify the table with a meaningful name later on. Typically, I’ll give it the same name as the database table. However, if the SqlDataAdapter’s select command contains a join, you’ll need to find another meaningful name.

The Fill method has an overload that accepts one parameter for the DataSet only. In that case, the table created has a default name of “table1” for the first table. The number will be incremented (table2, table3, …, tableN) for each table added to the DataSet where the table name was not specified in the Fill method.

The first thing we do, in the code above, is assigned the DataSet to the DataSource property of the DataGrid. This lets the DataGrid know that it has something to bind to, but you will get a ‘+’ sign in the GUI because the DataSet can hold multiple tables and this would allow you to expand each available table. To specify exactly which table to use, set the DataGrid’s DataMember property to the name of the table. In the example, we set the name to Customers, which is the same name used as the second parameter to the SqlDataAdapter Fill method. This is why I like to give the table a name in the Fill method, as it makes the subsequent code more readable.

The Update method, above, is called on the SqlDataAdapter instance that originally filled the dsCustomers DataSet. The second parameter to the Update method specifies which table, from the DataSet, to update. The table contains a list of records that have been modified and the Insert, Update, and Delete properties of the SqlDataAdapter contain the SQL statements used to make database modifications.

Putting it All Together

Until now, you’ve seen the pieces required to implement disconnected data management. What you really need is to see all this implemented in an application. Listing 1 shows how the code from all the previous sections is used in a working program that has been simplified to enhance the points of this lesson:

The Initdata method in Listing 1 contains the methods necessary to set up the SqlDataAdapter and DataSet. Notice that various data objects are defined at class level so they can be used in multiple methods. The DataGrid’s DataSource property is set in the constructor. Whenever a user clicks the Update button, the Update method in the btnUpdateClicked event handler is called, pushing modifications back to the database.

I hope you enjoyed this lesson and welcome you to return to the next one in this series, Lesson 06: Adding Parameters to Commands.